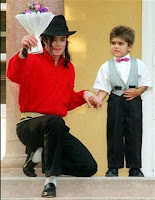 Jermaine Jackson (aka Mohammed Abdul Aziz), revealed to the Editor of The Muslim News, Ahmed J Versi, in an exclusive interview on February 7, 2007, that his brother Michael may soon convert to Islam. Complately, click: http://www.muslimnews.co.uk/paper/index.php?article=2879
Jermaine Jackson, 53, who took part in the controversial Celebrity Big Brother on Channel 4, discusses about his conversion and how his faith helped him get through the reality programme.
Jermaine was very sure that his brother, Michael, would convert to Islam. He said that Michael has shown a lot of interest in Islam. “When I came back from Makkah I got him a lot of books and he asked me lots of things about my religion and I told him that it’s peaceful and beautiful. He read everything and he was proud of me that I found something that would give me inner strength and peace. I think it is most probable that Michael will convert to Islam.”
Jeramaine believes if Michael converts, he would do a lot for Muslims. “He could do so much, just like I am trying to do. But Michael and I and the word of God, we could do so much. I think it’s time the young Muslims today should be proud and stay focused and not to fall in the pits of ridicule from the Western world and media and not to let these extremists try to label them as extremist and terrorist.”
Jermaine had a further message for youths. “My word to young Muslims around the world, especially here in the UK, is be proud as to who you are, stay focused, do your prayers, fast and don’t fall short to the worldly things because together we are strong. We should live according to God’s will, according to the way Allah wants us to be. There are going to be trials and tribulations but at the same time true Islam is so strong that it overcomes all of the false accusations and don’t ever deny who you are. Be proud and stand up and say it loud that ‘I am a Muslim’.
“That’s what I felt when I was in the Big Brother house. I wanted the world to know this is who I am and this is what has kept me strong,” he said.
Jermaine said he had a moderating influence in the house. He managed to calm down Shilpa Shetty, the Indian actress who won the programme, during her altercations with other female housemates. It has been argued that without Jermaine, Shilpa would have left the house earlier. “If I wasn’t a Muslim, I probably wouldn’t have been that way. It kept me focused. I was always reciting Allah’s name to keep myself calm.” He also prayed five times a day in the Big Brother house.
Did his experience in the Big Brother change him at all? “I haven’t changed because I had a higher tolerance level. I went into the Big Brother house with my self respect and my dignity and I came out of it with my self respect and dignity.”
So why did he go to the show? “I had been to big brother house in Berlin a couple of years ago with my father and my nephew. My father asked me whether I could do it and I said ‘this is piece of cake’. The opportunity came and I said yes.”
Jermaine converted to Islam in 1989 when he met Ali Gamber’s family in Bahrain. “All the family, especially the children were so respectful and peaceful. I was overwhelmed by the love of the children.” He realised that it was Islam that made the children the way they were. “I was searching for something to make my life complete.” Jermaine then went to Jeddah with his friend Ali where he converted to Islam. They then went to Makkah for Umrah (lesser pilgrimage). He has not yet gone for Hajj but said he hopes to go soon. “Umrah was the most wonderful experience and my life changed for the better since then.” Jermaine said he felt “serene and full of love. I felt God’s presence and felt complete.”
None of his family have thus far converted to Islam. However, they did not object to his conversion. “They were happy because they saw a better Jermaine. They saw a person who was very proud, very sure of him, but still very loving, very kind and very giving.”
Jermaine is now finishing a CD with his brothers on the Jackson family. “The Big Brother house was my recording break.” Jermaine said the idea of a musical on ‘Jackson Five’ was “my idea but we are going to find other people to play in the musical.”
Jermaine, who lives in Bahrain, founded Earthcare International to help children around the world who are disabled and less fortunate. “Our focus has been on Africa with the HIV/AIDS problem but we are concerned about people no matter where they are and the disadvantaged and disabled.”
Earthcare is doing a major awards show in Dubai in February 2008 to honour humanitarians who have devoted most of their lives and who have been influential in bringing solutions to a lot of mankind’s problems

Popular posts from this blog